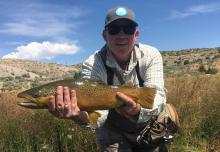 Hello, amigos!  I hope you're well.   My name is Scott Blevens.  I was born and raised in La Junta, Colorado.  I've been in Fort Collins since 1993. I'm married with 3 children.

I have a Bachelor's degree from CSU.  After graduating there, I moved over to University of Northern Colorado to get my teaching certificate.  I started teaching at Preston in 2001.  I earned my Master's degree in Curriculum Design from Arkansas State University in 2016.

Teaching has been a passion of mine even before I had my degree.  I have coached wrestling in Poudre School District since 1994.  I love sharing my knowledge with young people whether it's on the mat or in a classroom.

I truly enjoy reading.  I've read the entire Harry Potter series, Percy Jackson and several others.  My two favorite reads from this summer were: Have you seen Luis Velez and A Man called Ove.

Growing up in Colorado has allowed me to pursue my two favorite hobbies: skiing and fly fishing.  My family and I try to go skiing as much as possible during the winter.  It's a little humbling how quickly my children became better skiers than I am.  During the warmer months, I love to fly fish.  You could say I'm a bit obsessed with it I suppose.

I teach Spanish 1a and 1b.  My classroom is quite interactive with several changes happening throughout the period.  We usually change up the delivery method every 10-15 minutes which allow all types of learners to be successful.