Preston Middle School opened in the fall of 1994 and is named after the Ben Preston family who settled in the area where Preston is built. Members of the Preston family served the educational community for many years and contributed significantly to developing the community. We believe that it takes a true partnership among students,  parents and staff to create the quality learning environment that we want at Preston, an environment which stresses order and excellence. All programs – core academics and electives such as music, art, drama and athletics – are important and considered a significant aspect of our learning environment at Preston. 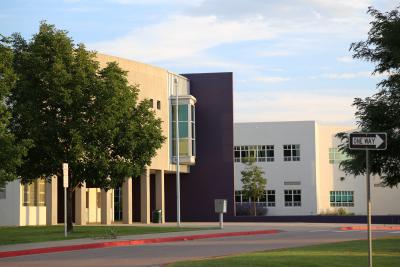 Preston Middle School was made possible by the support of voters for the 1990 bond issue. The firm selected to design the school was The Architect Studio. This firm worked closely with teams of teachers when designing the classrooms. Construction began in 1993, and it moved slowly at first because many construction companies in the area were helping to complete Denver International Airport. Flooding in the Midwest during that year also slowed the transport of supplies and equipment.

Preston Junior High School opened to 420 7th and 8th grade students on August 29, 1994. Architectural features include natural lighting from windows on all sides. Attention was paid to energy management and building efficiency. The Commons Area of the school was built so that students would be able to see Long’s Peak. With a magnificent view of the Rocky Mountains to the west and the Great Plains to the east, the 36-acre site on which Preston was built is also adjacent to Harmony Park and Traut Core Knowledge School. Additional to the physical connection between Traut and Preston is the unique academic progression from the Core Knowledge curriculum of Traut to the diverse District curriculum of Preston.

The foundations for active student involvement at the new junior high school began at its opening. Students living in the Preston attendance area actively participated in selecting the school’s colors of purple, black, and teal, and the puma for the school’s mascot. Students also helped to move furniture, books, and materials into the new building.

A link between the Preston family farm of old and modern, efficient architecture, Preston Middle School presents a vibrant learning culture to the Fort Collins community and its students.

Home of the STEM Institutes